Plastic is without a doubt one of the major symbols of our modern era.

It has many benefits: reducing food waste by lengthening product life-cycles, or the reduction of fossil fuel consumption during transport by lessening weight. Combining usefulness and low prices, it has grown exponentially since the 60’s. To be precise, plastic production has been multiplied twenty-fold! However the modern plastics economy has major drawbacks that are becoming more and more apparent.

32% of all plastic packaging material ends up in the environment, outside of any treatment system.

How is this number reflected in quantity?

About 5.5 trillion pieces of plastic for over 268 940 tonnes adrift at sea. These are the findings of a campaign that sampled every major body of water across the globe between 2007 and 2013, published in PlosOne. An estimation that could actually be low… If current rates continue, we could find as much plastic as fish in the oceans by 2050 in terms of mass.

The oceans are animated by vast cyclic currents that flow across the planter. Floating objects accumulate in the middle of these circulating masses of water, slowly building up in areas larger than that of France. These «plastic continents» are not floating islands of plastic on which you could walk. Less spectacular, the reality is nonetheless sobering: in these areas plastic is at least twice as numerous as plancton, the base of oceanic food chains.

It is not just a problem of unsightly and encumbering rubbish. Getting stuck in floating nets and other discarded objects can be deadly to marine mammals, turtles, birds and fish. Over 200 species are affected in the world. Animals often ingest them while chasing their normal prey. Of no nutritional value, they can transfer toxins, impede their movement and affect their health. They can kill by blocking the digestive system. Finally, they can even be the vector of introduction of invasive species.

To make matters worse, plastic concentrates chemical pollution. Its chemical nature (made from oil) facilitates the concentration of hydrophobic pollutants (that accumulate in fats and do not mix well with water). It has been shown that pieces of floating plastic have levels of these potentially dangerous compounds, such as pesticides, up to 1,000,000 times superior than that of the surrounding water. It is a major entryway of this type of pollution into trophic networks and even our own food.

What is frustrating is that so much plastic is thrown away after just one use. By some estimates, up to 95% of the global value of plastic (some 80-120 billion USD)  is lost per year on single use products. Only 14% of plastic packaging is collected for recycling. Recycled plastic is often found in less valuable secondary products that are not recyclable in turn. Given that the increase of production of plastic will also bring more waste, it is important that initiatives be taken to change our consumption of plastic. This can be achieved with better product design and waste management.

Our new cleanser, the 100% natural and biodegradable NOMAS ® is a body & hair foaming powder that was imagined with these goals in mind. Packaged in a small kraft paper pouch, it frees you from plastic bottles and because of its powder form lightens the weight of water that would have been transported over thousands of miles.

The European Commission encourages «bioplastics» as a potential solution in its Strategy for Plastics. However, it is not a fix-all. Some NGOs, like Surfrider Foundation, ring the alarm that bio-sourced plastics are not biodegradable as might be understood. They are compostable because they reach 90% biodegradation in industrial compost. Conditions in the marine environment are far from those found in industrial composters and as such degradation can be much slower. Advertising this kind of biodegradability can mislead consumers, they warn.

What can we do? 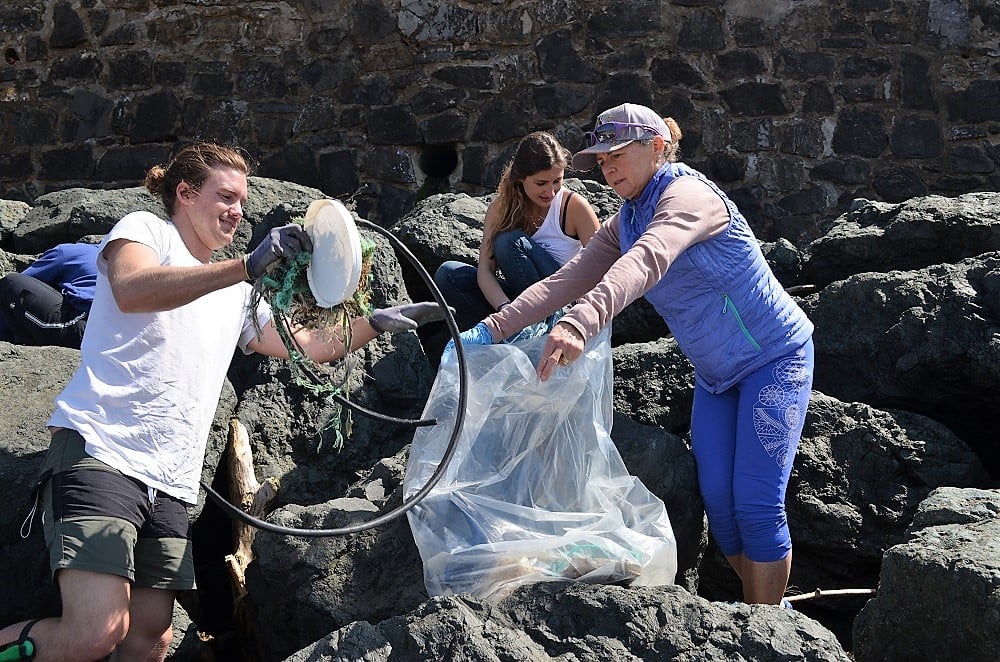 On April 13, we organized a beach clean-up at the Côte des Basques. Once again, the amount of trash we pulled out of the rocks and off the beach was considerable. The event was a real success with lots of enthusiastic participants and a real eye opener for many beachgoers.

As long as it is necessary we will uphold our yearly beach clean-up, in partnership with Surfider Foundation Europe.

Many other businesses are taking things into their own hands. We could mention Method soaps, for being one of the first to use beach plastic in their bottles. Even major companies, like Adidas, are doing it. In their Adidas x Parley for the Oceans collections, they use nylon from discarded fishing nets. Others make sunglasses (like Norton Point) and even skateboards (Bureo). Put your mind to it and anything can happen.